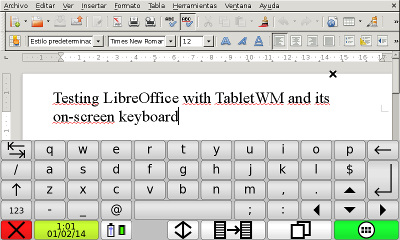 TabletWM is a window manager for XWindows, designed to be used in devices like mobile phones, tablets, or other with small screens. Unlike other window managers, TabletWM maximizes windows whenever it can. It also doesn't add window decorations, allowing to use the whole screen. It tries to follow the ICCCM and EWHM standards, being able to know when it can maximize a window and when it is not adequate.

It has, also, an on-screen keyboard and a bar with buttons that allows to do that operations with the mouse, if desired.

It is a very lightweight window manager (about 25Kbytes) based on XCB and Cairo, that needs some kind of application launcher to be fully useful, like TabletLauncher.