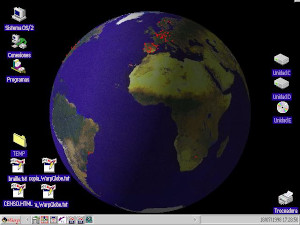 WARPGLOBE is a program that puts an earthglobe on the desktop, and paints the cities with some OS/2 users. It also paints in real time the light and dark zones produced by the sun. Of course, the user can select which part of the earth wants to see. The refresh interval can be selected by the user. This program is similar to another one for Linux, but this is prettier :-)

Source code for WarpGLOBE and the cities list generator

Binaries and source code for WarpGLOBE